5 Common Things That Cause Bike Accidents 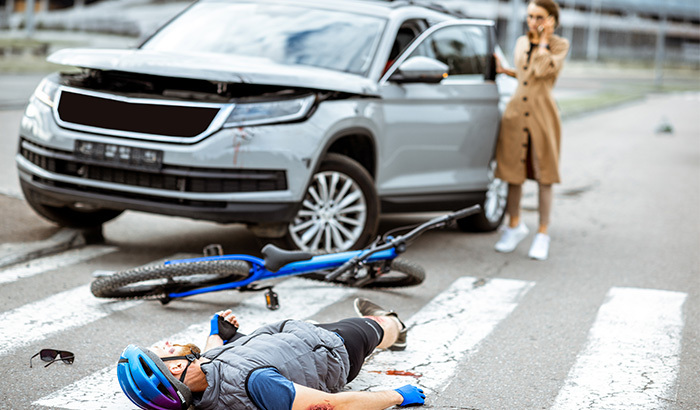 Bike accidents are more common than you might think, with 20 bicyclists annually being killed in auto accidents in Utah. According to the National Highway Traffic Safety Administration, fatal bicycle accidents happen more frequently between June and September.

While bicyclists on the road are required to follow the same rules as automobiles, many factors play into the number of injuries and accidents they encounter.

Here’s a look at five common causes of bicycle accidents and what you can do to prevent them.

A recent survey by the NHTSA found that 30% of bike accidents involved an automobile collision. Not every crash between a bike and a car is caused by distracted driving, but a large portion of them are.

Drivers may be focused on their cell phones, changing the radio station, trying to calm restless kids in the back seat, or maintaining a deep conversation with a passenger. Any number of things can steal a driver’s attention long enough to hit a bicyclist.

Most accidents happen at intersections in urban areas when bikes or automobiles are making left and right turns. Bikes are much smaller than other automobiles, so it doesn’t take much for a driver to not see them coming and run right into them.

Additionally, some bicycle accidents occur when drivers park and open their doors right into a cyclist in the bike lane. Most of these accidents aren’t fatal, but they can be extremely dangerous, especially when the biker is moving at a fast pace.

Bikers can also become distracted while riding. And though biker distraction is a less common cause of collisions, cyclists need to maintain awareness of their surroundings. Cars might not see you coming, but you can avoid many dangerous situations by paying attention to the vehicles and the environment around you.

Remember that Utah law requires cyclists to obey the same traffic laws as automobiles. Far too many accidents occur because bikers fail to stop at stop signs or traffic lights. Bikers should assume that motorists can’t see them and drive defensively to reduce the risk of accidents.

Another cause of bicycle accidents is problems with the bike itself. Riders may try to ride bikes that are the wrong size, and bikes that are too big can be much more difficult to control. Oversized bikes are a common cause of falls and crashes.

Older bikes that aren’t well maintained can also be a problem. Chains can fall off or get stuck, tires pop, and parts might break. Bike failures or malfunctions are another reason for crashes since they can quickly throw a wrench in things and bring a biker to the ground.

4. Hazards on the Road

Bike tires are small and can easily be thrown off by hazards on the road or on the sidewalk. Some of the most common dangers cyclists encounter on the road include:

Other hazards include stationary objects like street lamps, traffic signs, curbs, and fire hydrants. These are bigger risks for cyclists riding on the sidewalk, so stick with the bike lane whenever one is available.

It might not seem like much, but riding full speed into a stationary object can lead to serious injuries. Moving hazards like loose dogs and joggers can also be unpredictable and may cause bikers to lose control of their bikes.

Some drivers pose a greater threat to bicyclists than others due to their dangerous driving habits. Here’s a look at some of the reckless driving behaviors that commonly cause bicycle accidents:

As a bicyclist on the road, you can’t control what automobile drivers do. Taking extra precautions will help keep you safe and minimize the risk of accidents. Wear protective gear at all times, especially a helmet. Follow all traffic laws and ride defensively.

There are times that accidents will happen even when a bicyclist is following every possible precaution. This can result in serious injury. When that happens, it’s essential to speak to a personal injury attorney as soon as possible.

Bike accidents can leave cyclists with lasting injuries, medical bills, and other trauma. If you’ve been seriously injured in a bicycle accident, call the personal injury experts at Flickinger Sutterfield & Boulton right away.

We are located in Northern Utah and have represented clients for over 25 years. We’re experts at what we do, so you can trust us to take care of your personal injury case. Contact us today to set up a free case evaluation to see how our services can help you.