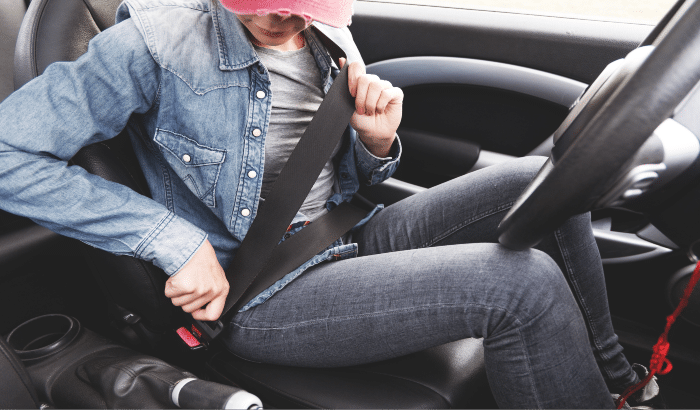 Federal seat belt laws exist to keep you and your family safe and secure when you are out and about.

In 2019 alone, safety restraints had a 90.7 percent rate of saving lives. Seat belt laws vary from state to state, but all are designed to promote maximum vehicle safety.

U.S. seat belt laws are subject to primary or secondary enforcement. Primary laws allow a police officer to pull over and ticket a driver for not wearing a seat belt. They are permitted to do this without any other traffic violation taking place. Secondary laws state that law enforcement may only issue a ticket for not wearing a seat belt if another traffic offense has taken place first.

In 49 states, with New Hampshire being the exception, driving while unbuckled is considered a misdemeanor. 34 of those states, including Washington DC, have primary seat belt laws for front seat occupants. The remaining 15 states assign secondary laws.

United States’ federal seat belt laws state that all vehicles, except buses, must have a three-point restraint system. Beyond that, each state varies in its enforcements. Specifics for each state can be found through Governors Highway Safety Association.

Additionally, there are no federally mandated car seat laws. Each state has its own variation of child safety restraint requirements. Safe Ride 4 Kids offers a comprehensive list of car seat laws by state.

Utah implements primary seat belt laws in all seats of the vehicle, and children up to age 8 must be properly restrained in a car seat or booster seat. This means that all passengers in a vehicle must wear a seat belt that fits properly and is securely fastened. The fine for this offense is $45.

Consequences of Not Buckling Up

The National Highway Traffic Safety Administration shares that of the 37,133 people killed in motor vehicle crashes in 2017, 47 percent were not wearing seat belts. In 2017 alone, seat belts saved around 15,000 lives and could have saved an additional 2,500 people if they had been wearing seat belts.

The consequences of not buckling up are abundantly clear:

Guidelines to Buckle Up Safely

Even if you follow all federal seat belt laws, you are still not immune to accidents. If you become involved in a motor vehicle crash, Flickinger Sutterfield & Boulton is here to help. Our personal injury lawyers are ready to assist you in the legal process and help you handle the aftermath of your accident.

We have offices in Provo, Orem, Saratoga Springs, and West Jordan, Utah. Contact us to discuss your situation today.