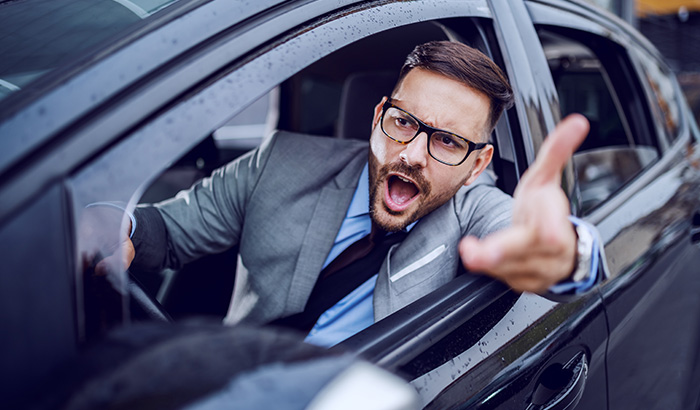 As Utah’s population grows, we must commit to avoiding road rage and aggressive driving from others and keeping our cool if we experience it. More drivers on the road mean slower commutes and more potential for aggression. Without greater intention to avoid emotional responses, this leaves us all at greater risk of an accident.

“Road rage” is a term that was coined in the 1990s by a television news station in response to several incidents of freeway shootings. Many have expanded the term to encompass all forms of aggressive driving.

What is the Difference Between Road Rage and Aggressive Driving?

The National Highway Traffic Safety Administration’s definition of aggressive driving is “the operation of a motor vehicle in a manner that endangers or is likely to endanger persons or property.” While this behavior is dangerous, it’s not intentionally putting others at risk.

How Big of a Problem are Road Rage and Aggressive Driving?

Aggressive driving and road rage are serious problems. According to NHTSA and Auto Vantage auto club data, 66% of traffic fatalities are attributable to aggressive driving. This data also shows that 37% of all road rage incidents involve firearms.

Utah has seen a trend of increased aggressive driving behaviors in 2021 and 2022. This includes behaviors like excessive speed, wrong-way driving, and brandishing weapons. The Utah Highway Patrol says this helps explain record numbers of highway fatalities in Utah and the nation overall.

They suspect one reason for this is that during the pandemic, highway traffic decreased, making commutes much faster. As traffic levels have returned to normal and brought back congestion, it has created a situation of impatience and risky maneuvers.

How Can People Avoid Aggressive Drivers?

People can take some steps to help protect themselves from aggressive drivers and prevent road rage incidents, including:

People who cannot control their anger while driving put everyone on the road in danger, and their behavior causes auto accidents. Your best bet is to keep your distance from these drivers So their terrible day doesn’t ruin yours.

Governing our Emotional Responses When we Drive

Aggressive driving often begets aggression in response, leading to further danger of auto accidents. Half of the drivers surveyed replied that when they are victims of aggressive driving, they respond with their own aggressive actions.

While you may be a perfectly polite and calm driver most of the time, it’s only human to feel anger when someone else puts us in danger by careless and aggressive actions. We can’t control what other drivers will do, but we can control how we respond. And this may be the difference between a collision and a close call. Avoiding road rage and aggressive driving is all our responsibility.

If you respond to aggression with aggression and an accident results from your actions, you’ll likely be held at least partially liable for damages and subject to legal action. This may result in a charge of reckless driving – a class B misdemeanor in Utah. You could face up to six months in jail, $1,000 in fines, and/or a three-month driving suspension.

When someone cuts you off, you’ll never even the score by driving aggressively in response. You’ll only be putting your own safety at risk. If you do encounter aggressive drivers, here are a few responses to aggression that will be more productive:

Injured in a Car accident? Flickinger Sutterfield & Boulton Can Help

Of course, avoiding road rage and aggressive driving is ideal, but these things can’t always be avoided. If you have been in an auto accident involving aggressive driving or road rage, the anxiety, fear, and frustration can be overwhelming even months and years after the accident. You don’t have to go through this alone.

Having competent legal counsel during this time can help you recover financially, allowing you to focus on physical and emotional healing. Flickinger Sutterfield & Boulton has the experience to help you get the best possible outcome. We know Utah’s legal landscape; we are familiar with the system’s intricacies that will influence your case’s outcome.

Contact us as soon as possible after your accident so we can help you get things moving in your favor. Even if you think the facts are clear-cut, you may need to fight for what you deserve. We are here to help.